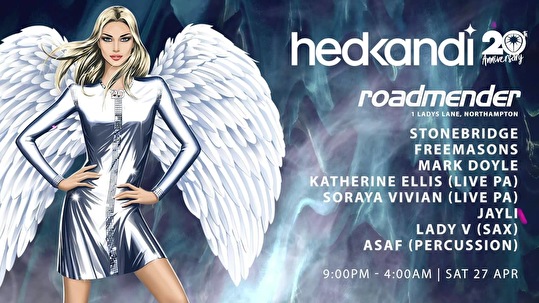 Line Up: To Be Announced

Launching as a radio station on Jazz FM back in 1999, Hedkandi quickly became a dance music phenomenon. Building on the popularity of the radio show, Hedkandi began releasing music under its own imprint as well as over 200 compilations, returning 16 Top 10 Singles and 7 Top 5 Albums.

It wasn’t long before clubbers began flocking to Hedkandi events across the globe, with residencies spanning the UK, Europe, Middle East, Asia and the Americas.

Hedkandi will this year be returning to Ibiza’s O Beach for the 7th consecutive year, and April will see the brand return to Roadmender

Breath-taking production is just as vital to Hedkandi events as clued in house music, so expect co2, lasers, confetti and more than a few surprises up our sleeves.