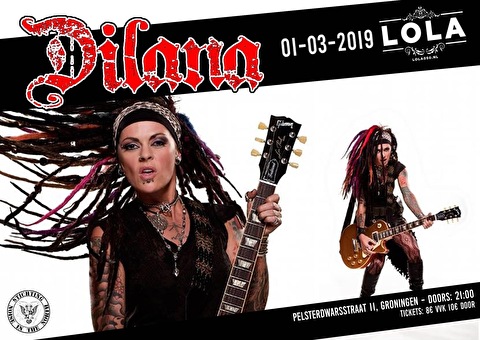 Bio:
Born in Johannesburg, South Africa, the girl known by age two as Dilana Smith discovered a love for music at an early age, participating in school and church choirs as an escape from an unpleasant home life. Inspired by such visceral singers as Janis Joplin and Tina Turner, she left school at sixteen to follow her own dreams. Dilana soon found herself with a promising music career in Holland, becoming one of the country's most coveted live acts. Recording and releasing the album Wonderfool in 2000 yielded five singles, four videos and a string of touring and festival gigs throughout the region, celebrating her natural talents as a songwriter and performer.

By way of Houston, Dilana arrived in L.A. and auditioned to compete on TV's "Rock Star Supernova." Quoted in the Hollywood Press, "The moment she stepped on the Mayan Theatre stage for Episode 1 and performed 'Lithium,' Dilana instantly became the show's frontrunner." Her powerful vocals and commanding stage presence amassed legions of new fans from around the world. That acclaim inspired Dilana to further pursue her musical passions with characteristic tenacity.

Dilana has performed with rock's biggest legends including Tommy Lee and Mick Mars (Mötley Crue), Dave Navarro (Jane's Addiction, Red Hot Chili Peppers) and Gilby Clark (Guns N' Roses). In 2007, she won over the masses with opening slot performances for Aerosmith and Beth Hart. She launched two solo tours spanning North America and Western Europe that both consistently sold out and earned stellar reviews in the press and in 2009, Dilana ended a third successful year performing by touring her native South Africa.


Following the release of seven singles, Dilana spent much of 2008 in the studio. In November 2009, she unleashed the album Inside Out, featuring 12 original tracks and her first full-length album in nine years. As new opportunities presented themselves, Dilana jumped at the chance to venture into film acting. The singer/songwriter won the BEST ACTRESS award at the Action On Film International Film Festival as well as winning both the BEST ACTRESS award and the BEST MUSIC award at the American International Film Festival for the 9 songs she wrote and performed in the rock drama: Angel Camouflaged.

During her wide-ranging world touring, Dilana performed in Afghanistan for the troops in 2009 and 2010. She was a part of the Go Army Concert Series tour in August 2011, sharing the stage with Lynyrd Skynyrd and the Doobie Brothers as well as touring Holland, South Africa, and across the USA.

2012/2013 brought fans news that Dilana would be welcoming two new creations to the world. One, the studio release of her new album titled Beautiful Monster, in which she just finished a tour where she opened for Puddle of Mudd and also for Saliva, and the other, Dilana's best creation EVER - a beautiful daughter named River. Both officially released in 2013.

Dilana toured the world extensively, going non-stop from 2014 to present day, spending most of her time in Europe, but also touring the USA and Africa. Dilana has released 3 singles during this time; 3rd and Lindsley, Right Here Right Now (with the Bottleneck Rockers), No Plain Jane (with the Roosterz) and her most current single, Roxanne - a reggae mixed single which she performed on The Voice Of Holland in late 2016. In 2016 Dilana also released the soundtrack to her movie Angel Camouflaged, entitled Dilana.

2017/2018 brought Dilana to Holland to follow her career and raise her daughter. She is currently working on her first cover album and writing songs for a new album, both tentatively set to be released in 2018. Her single, BEHIND CLOSED DOORS, was written by Dilana specifically for the CKM/FIER organization to help with the awareness campaign of Child and Human Trafficking. The song will be released in the coming months, tentatively set for April 2018.