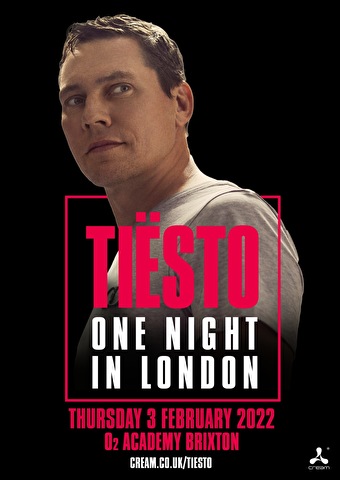 There are few artists in the world who can command quite as much of a presence as Grammy Award winning, platinum-certified Dutch DJ/Producer Tiësto. One of the original heavyweight DJs on the scene, performing around the world and headlining some of the biggest electronic music festivals including Creamfields and Tomorrowland. Now he's returning to the UK for a very special 'One Night In London' show performing at O² Academy Brixton on Thursday 3rd February 2022.

This will be Tiësto's first performance in the capital in over 3 years following his sell out London show in the mighty 15,000 capacity Steel Yard superstructure and follows recent global success with his Grammy nominated track 'The Business' which has garnered over 1 billion streams to date. From his underground dance floor bangers to his high-profile Las Vegas residency and crossover success Tiësto created the blueprint that defines what it means to be a success in today's dance music world and continues to expand across genres, always evolving his craft. His return will see him perform at London's O² Academy Brixton, a relatively small and intimate venue compared to the major festival stages he's renowned for and gives fans to experience the magic up close and personal.

Most recently, Tiësto joined forces with pop powerhouse Ava Max to release 'The Motto', the third single from his upcoming album via Atlantic Records which has been streamed 52.3 Million times so far. Prior to that, Tiësto's collaborated with multi-platinum superstar Karol G on 'Don't Be Shy' which has garnered over 336 Million streams to date.

To be first in line for tickets, make sure you sign up for presale www.cream.co.uk/tiesto which goes live 9am (GMT) Wednesday 8th December with general sale 9am (GMT) Friday 10th December